The stability of two electron system under the influence of the exponential-cosine-screened-Coulomb (ECSC) potential has been studied as a function of continuously varying nuclear charge (Z) and screening constant (μ). Inter-electronic correlation has explicitly been considered by adopting Hylleraas type basis set under Ritz variational framework. The correlated basis integrals originating from the elements of Hamiltonian and overlap matrices are evaluated analytically. Critical nuclear charges (Zc), the minimum amount of nuclear charge required to form at least one bound state, corresponding to different μ values have been predicted. Different structural properties along with two-particle densities (TPD) for all possible orientations of the electrons have been estimated using the optimized wave function. Prominent signature of quantum phase transition (QPT) of the system around the Zc values has been reported. A comparative study has been done on the critical stability of the system under the influence of ECSC potential, screened Coulomb (SC) potential and pure Coulomb (PC) potential. 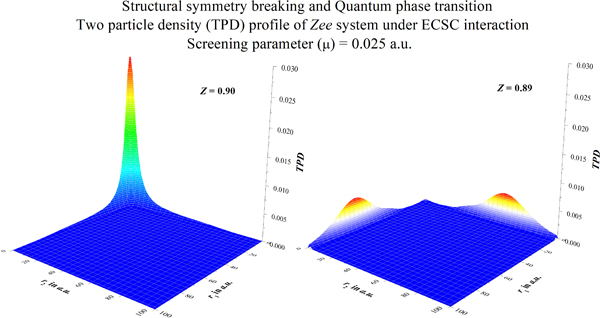