We theoretically investigate the single-photon router using two dipole-dipole interaction (DDI) atoms embedded in a multichannel coupled cavity arrays (CCAs). When the atoms are symmetrically coupled to the cavity, the DDI influences both the height and position of the two peaks and gives rise to a shift in the position of the resonance. It is also shown that the effects of DDI are similar to the positive detuning. On the other hand, for the atom-cavity asymmetric coupling case, it is found that, Fano-line shapes are revealed evidently in the scattering spectra by adjusting the interatomic DDI. Moreover, Fano resonance can also be controlled by modulating the atom-cavity coupling strength and the detuning in the presence of DDI. Finally, in the incident channel the total reflection of the single photon is obtained based on the coherent resonance and the existence of the photonic bound states. Based on these characteristics, it is a feasible scheme to generate a Fano-typed router and it could be useful for designing the single-photon devices. 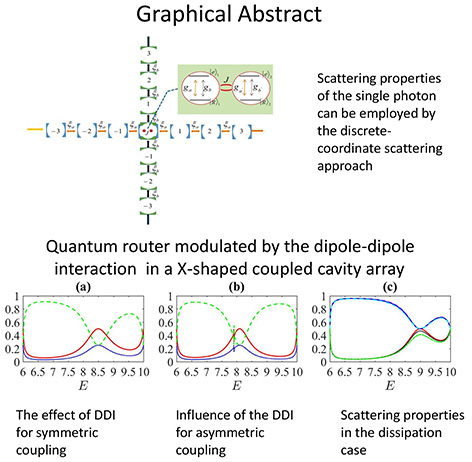