In this paper we investigate the dynamics of entanglement and quantum discord, as two measures of quantum correlation resources, between two effective two-level atoms interacting with a dissipative environment at zero temperature in the presence of Kerr medium and Stark shift where m-photon transitions are allowed. Also, dipole–dipole interaction between the two atoms is taken into account. The results show that, the entanglement and quantum discord between the two atoms, which have similar behaviour qualitatively, both can be protected by means of the adjustment of Stark shift, Kerr parameter and dipole–dipole interaction. In other words, the Stark shift besides Kerr medium effect always ensure a noticeable maintenance of entanglement for m-photon processes in the Markovian and non-Markovian regimes. In particular, we find that in the non-Markovian regime, as the strengths of Stark shift, the Kerr medium and dipole–dipole interaction are increased, the amount of entanglement, as well as quantum discord approach to their maximum value, i.e., quantum correlations are well-protected. 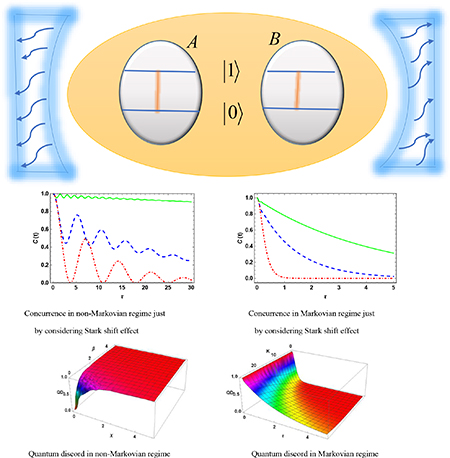