A moving three-level Λ-type atom in a dissipative cavity

In this paper, we consider a three-level Λ-type atom interacting with a two-mode of electromagnetic cavity field surrounded by a nonlinear Kerr-like medium, the atom and the field are suffering decay rates (i.e. the cavity is not ideal) when the multi-photon processes is considered. Also, the atom and the field are assumed to be coupled with a modulated time-dependent coupling parameter under the rotating wave approximation. The wave function and the probability amplitudes are obtained, when the atom initially prepared in the superposition states and the field initially in the coherent states, by solving the time-dependent Schrödinger equation by taking a proper approximation to the system of differential equations. An analytical expression of the atomic reduced density operator is given. We studied the degree of entanglement, between the field and atom, measure (DEM) via the concurrence, Shannon information entropy, momentum increment and diffusion, and finally we investigated the effects of decay rates and the time-dependent parameters on Husimi Q-function. 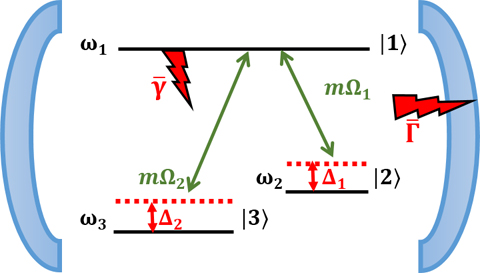