Different factors lead to DNA damage and if it is not repaired in due time, the damaged DNA could initiate mutagenesis and cancer. To avoid this deadly scenario, specific enzymes can scavenge and repair the DNA, but the enzymes have to bind first to the damaged sites. We have investigated this binding for a specific enzyme called (6–4) photolyase, which is capable of repairing certain UV-induced damage in DNA. Through molecular dynamics simulations we describe the binding between photolyase and the DNA and reveal that several charged amino acid residues in the enzyme, such as arginines and lysines turn out to be important. Especially R421 is crucial, as it keeps the DNA strands at the damaged site inside the repair pocket of the enzyme separated. DNA photolyase is structurally highly homologous to a protein called cryptochrome. Both proteins are biologically activated similarly, namely through flavin co-factor photoexcitation. It is, however, striking that cryptochrome cannot repair UV-damaged DNA. The present investigation allowed us to conclude on the small but, apparently, critical differences between photolyase and cryptochrome. The performed analysis gives insight into important factors that govern the binding of UV-damaged DNA and reveal why cryptochrome cannot have this functionality.

Contribution to the Topical Issue: “Dynamics of Systems at the Nanoscale”, edited by Andrey Solov’yov and Andrei Korol. 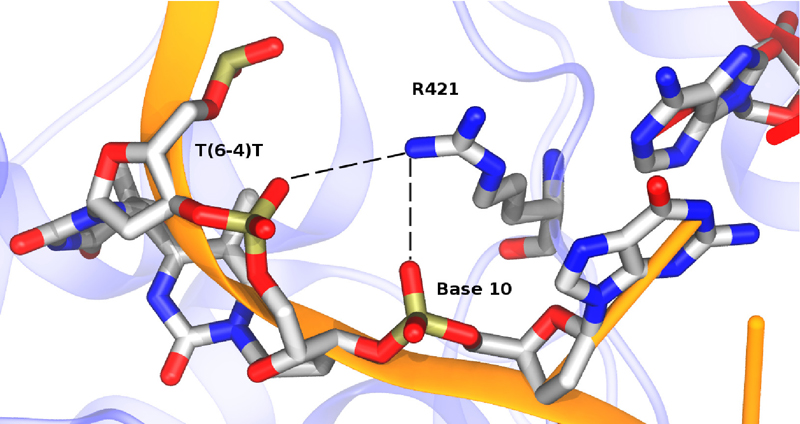