When exposed to a thermal beam of hydrogen atoms, gas-phase coronene cations C24H12+ can be sequentially hydrogenated. This process is accompanied by a gradual transition of the electronic structure from aromatic to aliphatic. The planar very stable coronene structure transforms into the significantly weaker corrugated structure, typical for aliphatic molecules. In this study, we have investigated the hydrogenation of 5 smaller polycyclic aromatic hydrocarbon cations using a combination of radiofrequency ion trapping with time-of-flight mass spectrometry. Anthracene (C14H10+), pyrene (C16H10+), triphenylene (C18H12+), tetracene (C18H12+) and 8-9-benzofluoranthene (C20H12+) only cover a small mass range, but differ in carbon/hydrogen ratio, number of outer-edge sites and overall structure. We have observed qualitatively similar initial hydrogenation patterns for all 5 molecular ions, with odd hydrogenation states being dominant. Strong quantitative differences in hydrogenation and in attachment-induced fragmentation were found. For the case of pyrene cations, we have also investigated exposure to atomic D. Clear lines of evidence for HD/D2 abstraction reactions of Eley–Rideal type were found, as previously observed for coronene cations.

© The Author(s) 2020. This article is published with open access at Springerlink.com 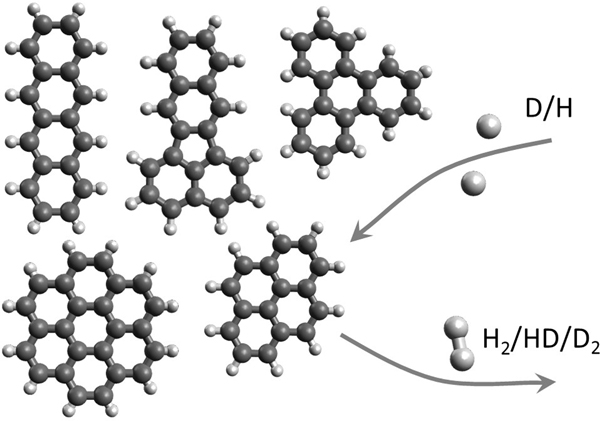