A self-sustained fluid model is used to study the effect of variation of noble gas fraction (Ar) and variation of gas mixture ratio (HBr/Cl2/Ar) on density distribution of important etchant species (Br, Br+, Cl, Cl+, and H) in HBr/Cl2/Ar capacitive coupled plasma discharge that is being vastly used for dry etching of Si, GaAs, GaSb and other group III and IV semiconductor materials. A comprehensive set of 80 reactions in this plasma discharge is presented which contains electron impact reactions, neutral–neutral reactions, ion–ion reactions, and charge transfer reactions. Based on simulation results, it is found that densities of neutral species have normal distribution curve; density is higher at center of the reactor and decreases as we move towards electrode surface, while densities of charged species follow bimodal distribution in which peaks occur near electrodes. Furthermore, the addition of Ar in HBr/Cl2 causes electron density to increase which promotes ionization and dissociation. It was found that at constant supply of Cl2 gas, by increasing Ar fraction (HBr/Cl2/Ar from 80/10/10 to 10/10/80) densities of Br, Br+ and H will go down and at constant supply of Ar gas, raising Cl2 fraction in feedback gases (HBr/Cl2/Ar from 70/20/10 to 20/70/10) promoted the production of Cl and Cl+ while densities of Br, Br+, and H are dropped-off. Hence, densities and fluxes of important etchant species – for chemical vs. physical etching – can be controlled by tuning of mixture ratio. 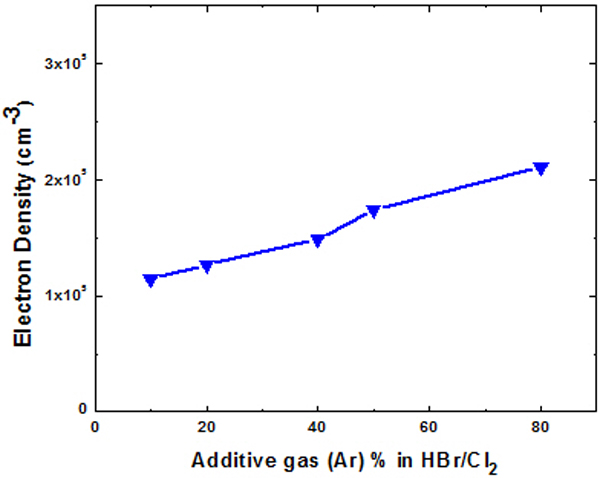