We have measured mass spectra for positive ions produced by low-energy electron impact on anthracene using a reflectron time-of-flight mass spectrometer. The electron impact energy has been varied from 0 to 100 eV in steps of 0.5 eV. Ion yield curves of most of the fragment ions have been determined by fitting groups of adjacent peaks in the mass spectra with sequences of normalized Gaussians. Appearance energies for all these ions have been determined, and we report the first direct measurement of the triple ionization energy of anthracene at 45.5±0.5 eV. The groups of fragments containing 8–13 carbon atoms provide evidence for hydrogen rearrangements during the fragmentation, involving retention or loss of one or two additional hydrogen atoms. Groups of fragments with 6 and 7 carbon atoms clearly show the presence of doubly-charged fragments. The smaller fragments with 1–4 carbon atoms all show broadened peaks, and these fragments may be partly or mostly due to energetic charge-separation fragmentations of doubly-charged anthracene. 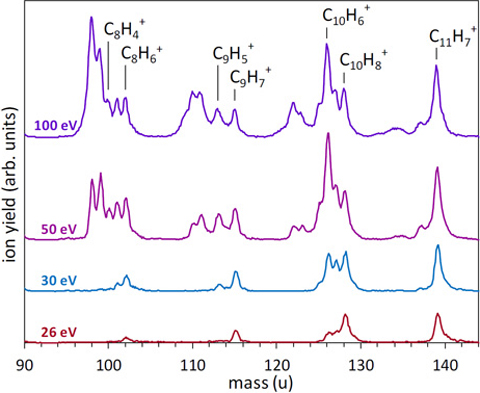