Dissociative electron attachment (DEA) to formic acid is investigated using velocity slice imaging of H− ions. From the momentum distributions, we infer that the broad peak observed in absolute cross section of H− between 6 and 12 eV has contribution from three resonances. The resonance below 7 eV shows angular distribution fairly close to that seen from the B1 resonance in water and the first peak of the two peaks from the hydroxyl site of acetic acid. The resonance observed around 9 eV appears to have definite contribution from the C-site of the molecule, as identified from the momentum distribution and similarity with other organic molecules including methane. The analysis of the kinetic energy distribution shows that the two resonances below 8 eV are dominated by the contribution from hydroxyl site of the molecule. The results indicate that formic acid tends to behave like other small carboxylic acids and alcohols and displays functional group dependence and corresponding site specificity in the DEA process, to a large extent. 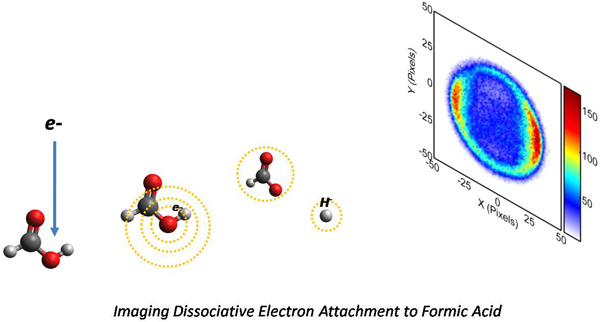