Numerical simulation of mixing of argon- and water-plasma species in argon-steam arc discharge has been investigated in thermal plasma generator with the combined stabilization of arc by axial gas flow (argon) and water vortex. Mixing process is described by the combined diffusion coefficients method in which the coefficients describe the diffusion of argon “gas”, with respect to steam “gas”. Calculations for currents 150–600 A with 15–40 standard liters per minute (slm) of argon reveal inhomogeneous mixing of argon and oxygen-hydrogen species with the argon species prevailing near the arc axis. However, calculations for currents higher than 400 A were not straightforward and a phenomenon of premixing of argon and steam species in the upstream discharge region was predicted from modelling to obtain reasonable agreement with experimental data. Premixed argon-steam plasma has a global impact on the plasma jet parameters near the exit nozzle as well as on the overall arc performance. The results of thermo-fluid fields, species mole fractions and radiation losses from the discharge are presented and discussed. Our former calculations based on the homogeneous mixing assumption differ from the present model in temperature, enthalpy, radiation losses, and flow field. Comparison with available experiments exhibits very good qualitative and quantitative agreements for the radial temperature profiles and satisfactory agreement for the velocity profiles 2 mm downstream of the exit nozzle. 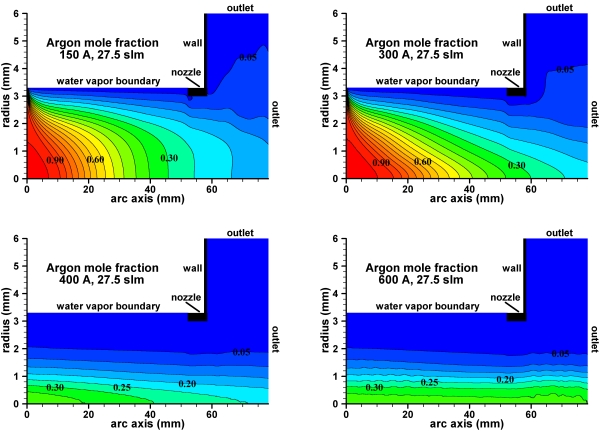