We report on an experiment in which the decay time of an oscillating fluorescence of rubidium atoms on a 5P state in a coated vapor cell exceeds several of milliseconds; that is, many orders of magnitude longer than the normal decay time of the excited atoms. We found that the amplitude of this peculiar feature with long-term decay strongly depends to which particular atomic ground sublevels of the Rb atom and to which particular Rb isotopes are used and it could be clearly observed in a high-quality cell only. All these cases are characterized by a sufficiently long lifetime of optically pumped atoms on a sublevel of Rb atom ground state. A numerical simulation based on a complete density matrix developed for the case of two intense pumping and probing laser fields interacting with low density Rb vapor is presented. The model supports the coherent coupling process of a population on excited level to the correspondingly long-lived population on the ground-state sublevel by both probing and pumping radiations as the most plausible mechanism to explain the observed spectacular phenomenon. 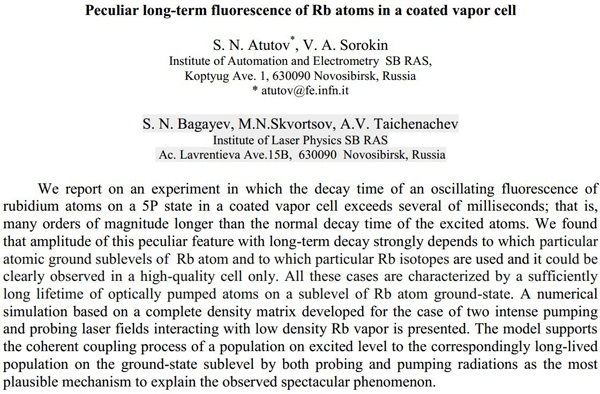