Spectral energy and angular distributions of bremsstrahlung radiation produced by 3.5 keV electrons in scattering with a free SF6 molecule

Absolute double differential cross sections (DDCS) of bremsstrahlung (BS) radiation produced by 3.5 keV electrons in scattering with a free SF6 molecule were measured by using a Si-PIN photodiode detector in the angular detection range of 45°−110° relative to the direction of incident electrons. Angular distributions of the BS photons are found to be anisotropic. The experimental DDCS spectra are compared with the theoretical calculations obtained from atomic-field BS formulations of Kissel–Quarles–Pratt (KQP) using the “additivity hypothesis”. A fair agreement is observed between the measured results and those obtained from the KQP calculations for both the energy and the angular spectral distributions of BS radiation. The measured anisotropy of bremsstrahlung radiation is reproduced reasonably well by a modified Sommerfeld formula, if the relative velocity β is chosen to be half of the incident electron velocity β0. The measured anisotropy may be described by a parameter P, which is compared with the degree of polarisation obtained from theoretical calculations. Further, it is noted that the molecular weight, geometry and the number of constituent atoms present in the considered molecule do not seem to influence the usefulness of “additivity hypothesis”. In conclusion, the present results have once again corroborated the validity of “additivity hypothesis” for predicting the spectral distributions of molecular bremsstrahlung produced by keV-electrons. 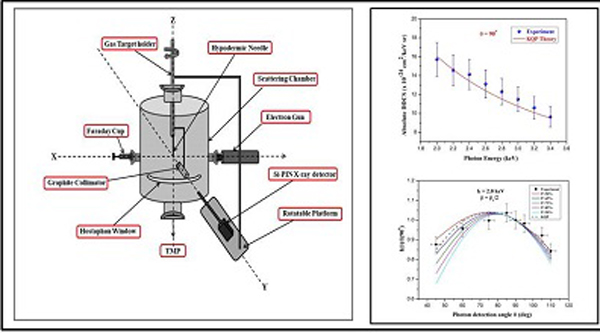