Multiply charged argon ions produced from decay of L-shell hole states by impact of a continuous beam of 3.5 keV electrons are studied for the first time using an energy resolved electron-ion coincidence technique. The TOF spectra of argon ions are measured in coincidence with 18-energy selected electrons emitted in a wide energy range (126–242 eV). The coincidence measurement between the energy selected electrons and the correlated ions specifies the individual decay channel for various multiply charged ions. New experimental data are obtained and reported on the correlation probability for production of argon ions with charge states 1+ to 4+ as a function of ejected electrons in the considered energy range. The relative correlation probability of producing different charge state ions and corresponding physical processes involved in their production are presented and discussed. It has been found that the maximum probability for production of Ar2+ ions correlated to ejected Auger electrons in the energy range of 205–209 eV is 100%. No theoretical predictions are available to compare with these results. The present study shows further that not only the auto-ionization and normal Auger transitions but also several other decay processes including Coster-Kronig transitions followed by Auger cascades with a fraction of shake process play important role in producing ions with charge states 1+ to 4+. 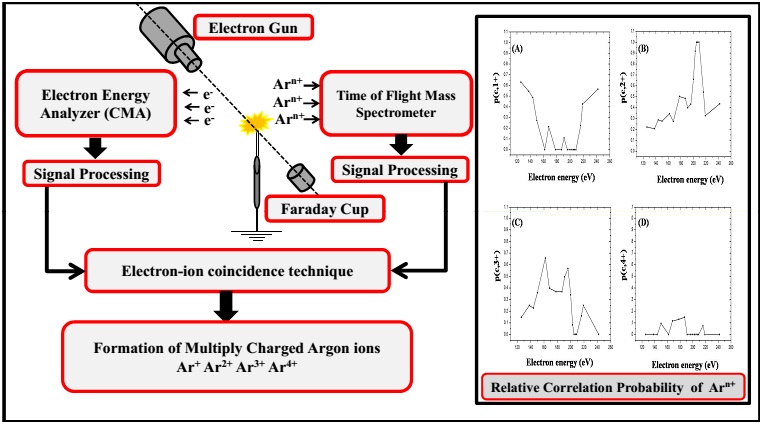