Quantum dynamics of a hydrogen-like atom in a time-dependent box: non-adiabatic regime

We consider a hydrogen atom confined in time-dependent trap created by a spherical impenetrable box with time-dependent radius. For such model we study the behavior of atomic electron under the (non-adiabatic) dynamical confinement caused by the rapidly moving wall of the box. The expectation values of the total and kinetic energy, average force, pressure and coordinate are analyzed as a function of time for linearly expanding, contracting and harmonically breathing boxes. It is shown that linearly extending box leads to de-excitation of the atom, while the rapidly contracting box causes the creation of very high pressure on the atom and transition of the atomic electron into the unbound state. In harmonically breathing box diffusive excitation of atomic electron may occur in analogy with that for atom in a microwave field. 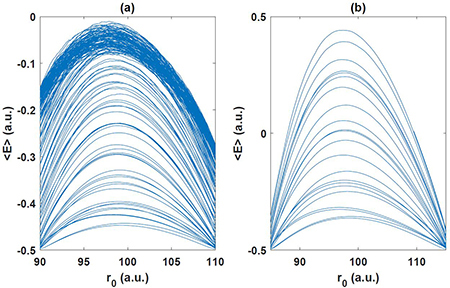