The ionization potentials of bound electrons decrease when an atom is immersed in plasma. The calculation or measurement of the ionization potential depression (IPD) is used to estimate the influence of the plasma environments on atomic structures. This work reports a simple method for the estimation of the effects of IPD on H- and He-like ions in dense plasmas. The method predicts the critical free electron densities and temperatures after which spectral lines of H- and He-like ions disappear. The critical free electron density and temperature are the free electron density and temperature that correspond to the classical turning point radius of a bound electron in the highest occupied orbital of the two atomic states for a transition that is equal to the ion-sphere radius. The obtained critical free electron densities are in better agreement with the ORION experimental results than those obtain using other available theories. The present method may thus provide a more accurate estimation of the effects of IPD in dense plasmas and may be extended to other multi-electron ions such as Li- and Be-like ions. 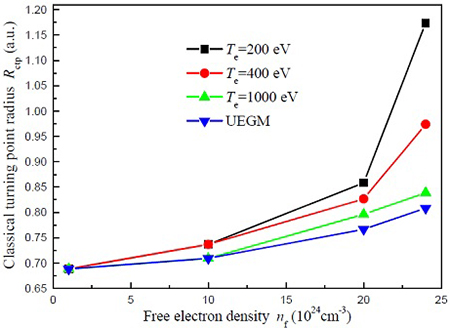