In calculating the energy corrections to the hydrogen levels we can identify two different types of modifications of the Coulomb potential VC, with one of them being the standard quantum electrodynamics corrections, δV , satisfying ǀδVǀ ≪ ǀVCǀ over the whole range of the radial variable r. The other possible addition to VC is a potential arising due to the finite size of the atomic nucleus and as a matter of fact, can be larger than VC in a very short range. We focus here on the latter and show that the electric potential of the proton displays some undesirable features. Among others, the energy content of the electric field associated with this potential is very close to the threshold of e+e− pair production. We contrast this large electric field of the Maxwell theory with one emerging from the non-linear Euler–Heisenberg theory and show how in this theory the short range electric field becomes smaller and is well below the pair production threshold. 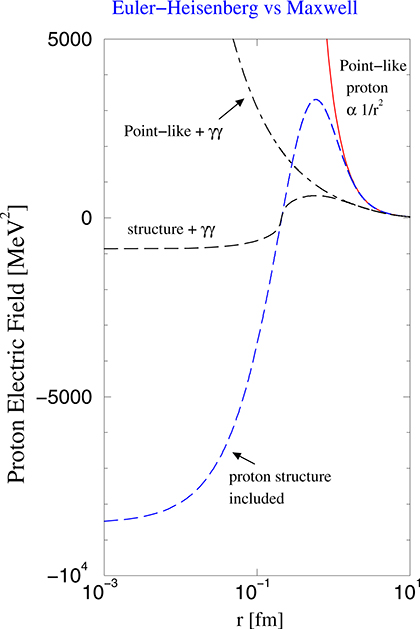