A theoretical investigation has been presented to study the effect of polarization force on nonlinear dust acoustic (DA) cnoidal waves in dusty plasma composed of negatively charged dust fluid, Maxwellian electrons and superthermally distributed ions. The effect of polarization force is significantly modified due to the presence of the superthermal ions. In particular, an increase in superthermality index of ions leads to a decrease in polarization parameter. By employing reductive perturbation method, the nonlinear Korteweg–de Vries (KdV) equation is derived for the study of DA cnoidal waves. Further, the Sagdeev potential approach is employed to find the solution of KdV equation to analyze the characteristics of DA cnoidal waves. Only negative potential DA cnoidal waves are observed. Furthermore, the combined effects of polarization force and superthermality of ions on the characteristics of negative potential DA cnoidal waves have been studied in detail. It is emphasized that the real implementation of our present results is in laboratory experiments as well as in different regions of space and astrophysical environments especially in Saturn’s magnetosphere, comet tails, etc. 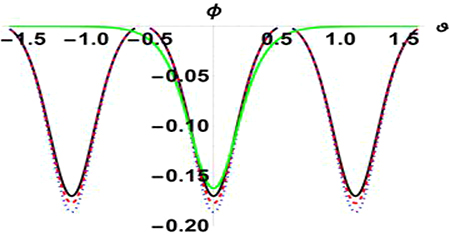