Bound states, also called soliton molecules, can form as a result of the interaction between individual solitons. This interaction is mediated through the tails of each soliton that overlap with one another. When such soliton tails have spatial oscillations, locking or pinning between two solitons can occur at fixed distances related with the wavelength of these oscillations, thus forming a bound state. In this work, we study the formation and stability of various types of bound states in the Lugiato-Lefever equation by computing their interaction potential and by analyzing the properties of the oscillatory tails. Moreover, we study the effect of higher order dispersion and noise in the pump intensity on the dynamics of bound states. In doing so, we reveal that perturbations to the Lugiato-Lefever equation that maintain reversibility, such as fourth order dispersion, lead to bound states that tend to separate from one another in time when noise is added. This separation force is determined by the shape of the envelope of the interaction potential, as well as an additional Brownian ratchet effect. In systems with broken reversibility, such as third order dispersion, this ratchet effect continues to push solitons within a bound state apart. However, the force generated by the envelope of the potential is now such that it pushes the solitons towards each other, leading to a null net drift of the solitons. 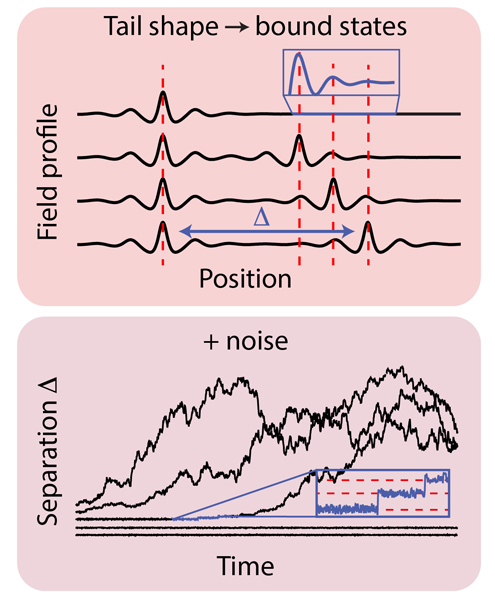