Shape and strength of dynamical couplings between vibrational levels of the H2+, HD+ and D2+ molecular ions in collision with He as a buffer gas*

We present a detailed computational analysis for the interaction between the vibrating/rotating molecular ions H2+, HD+, D2+ colliding with He atoms employed as buffer gas within ion trap experiments. The production and preparation of these molecular ions from their neutrals usually generate rovibrationally excited species which will therefore require internal energy cooling down to their ground vibrational levels for further experimental handling. In this work we describe the calculation of the full 3D interaction potentials and of the ionic vibrational levels needed to obtain the vibrational coupling potential matrix elements which are needed in the multichannel treatment of the rovibrationally inelastic collision dynamics. The general features of such coupling potential terms are discussed for their employment within a quantum dynamical modeling of the relaxation processes, as well as in connection with their dependence on the initial and final vibrational levels which are directly coupled by the present potentials. As a preliminary test of the potential effects on scattering observables, we perform calculations between H2+ and He atoms at the energies of an ion-trap by using either the rigid rotor (RR) approximation or the more accurate vibrationally averaged (VA) description for the v = 0 state of the target. Both schemes are described in detail in the present paper and the differences found in the scattering results are also analysed and discussed. We further present and briefly discuss some examples of state-to-state rovibrationally inelastic cross sections, involving the two lowest vibrational levels of the H2+ molecular target ion, as obtained from our time-independent multichannel quantum scattering code. 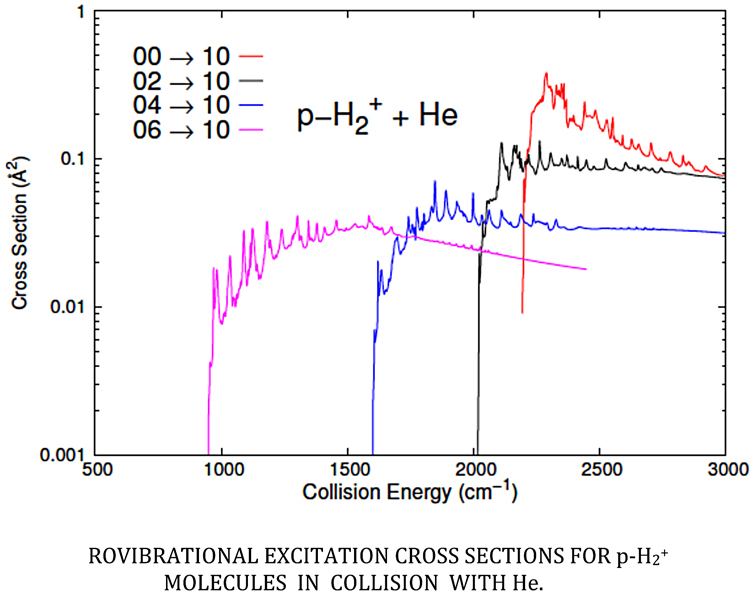