Quantum mechanical multiconfiguration time-dependent Hartree (MCTDH) calculations are presented for the Ar2ICl cluster. The Hamiltonian operator is expressed in satellite coordinates, with its potential term being represented as a sum of the three-body ArICl ab initio parameterized interactions plus the Ar–Ar ones. The potential surface shows different type of low-lying minima (global and local), that influence the vibrational dynamics of the system. The vibrational ground state properties and specific vibrationally excited states are obtained from improved relaxation MCTDH calculations employing a large number of basis set functions, especially for the angular part, to achieve convergence. By analyzing the spatial density distributions of the vibrational states we are able to characterize the corresponding states to different isomers, such as tetrahedral, linear, bending type ones. The binding energy of each isomer is also computed, and they contribute to evaluate their relative stability, as well as the importance of the underlying multiple minima of the potential surface. 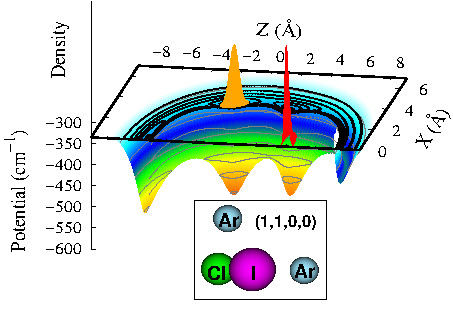