In this paper, we show the development steps for an iterative performance and impedance model of gridded radio-frequency (RF) ion thrusters. The input parameters are equivalent to those of the real propulsion system; i.e., coil current, propellant mass flow, and extraction grid voltages. Therefore, the model is easily validated and verified by experimental data and can furthermore be used to optimize the overall thruster performance. The model predicts volume-averaged plasma parameters such as electron temperature, conductivity, total pressure, and ionization fraction as well as thruster performance data like generated thrust, specific impulse, and mass and electrical efficiency. The above mentioned plasma parameters are obtained as functions of the discharge chamber’s geometry by using a charge balance equation that relates generated ions to ions lost at the chamber’s walls. The plasma related quantities influence the electromagnetic field penetration which is here evaluated by means of a diffusion equation for the vector potential. The vector potential is obtained by a 3D Finite-Difference-Method on a cubic and rectangular grid which, in principle, offers the opportunity to have arbitrary plasma chamber and coil geometries. An actual ion thruster geometry is evaluated in this study in favor of experimental verification of the numerically obtained data. The thruster’s coil generates highly asymmetric electromagnetic fields which motivates the use of a three-dimensional solver. A dissipation model based on Ohm’s law and Poynting’s theorem is used to determine the absorbed power within the discharge. To obtain a stable solution, the electromagnetically absorbed power is equated to the power lost due to elastic and inelastic collisions and electron wall flux. This whole process is iteratively repeated until the degree of ionization converges within a given threshold. To relate the stable discharge parameters to the thruster performance an extraction model based on a modified version of Child-Langmuir’s law is used. Within the model, the extracted ion beam current is calculated as a function of extraction aperture, applied extraction voltage, and plasma sheath size. A particle balance equation is then used to iteratively compute the total pressure combining neutral, electron, and ion pressures. After convergence, the plasma impedance, typically described by a transformer model, is transformed to its equivalent series representation as seen by the RF source at its terminals. Furthermore, thruster performance data are evaluated which gives rise to use this model for optimization purposes. It can thus be regarded as a toolbox for virtual prototyping. 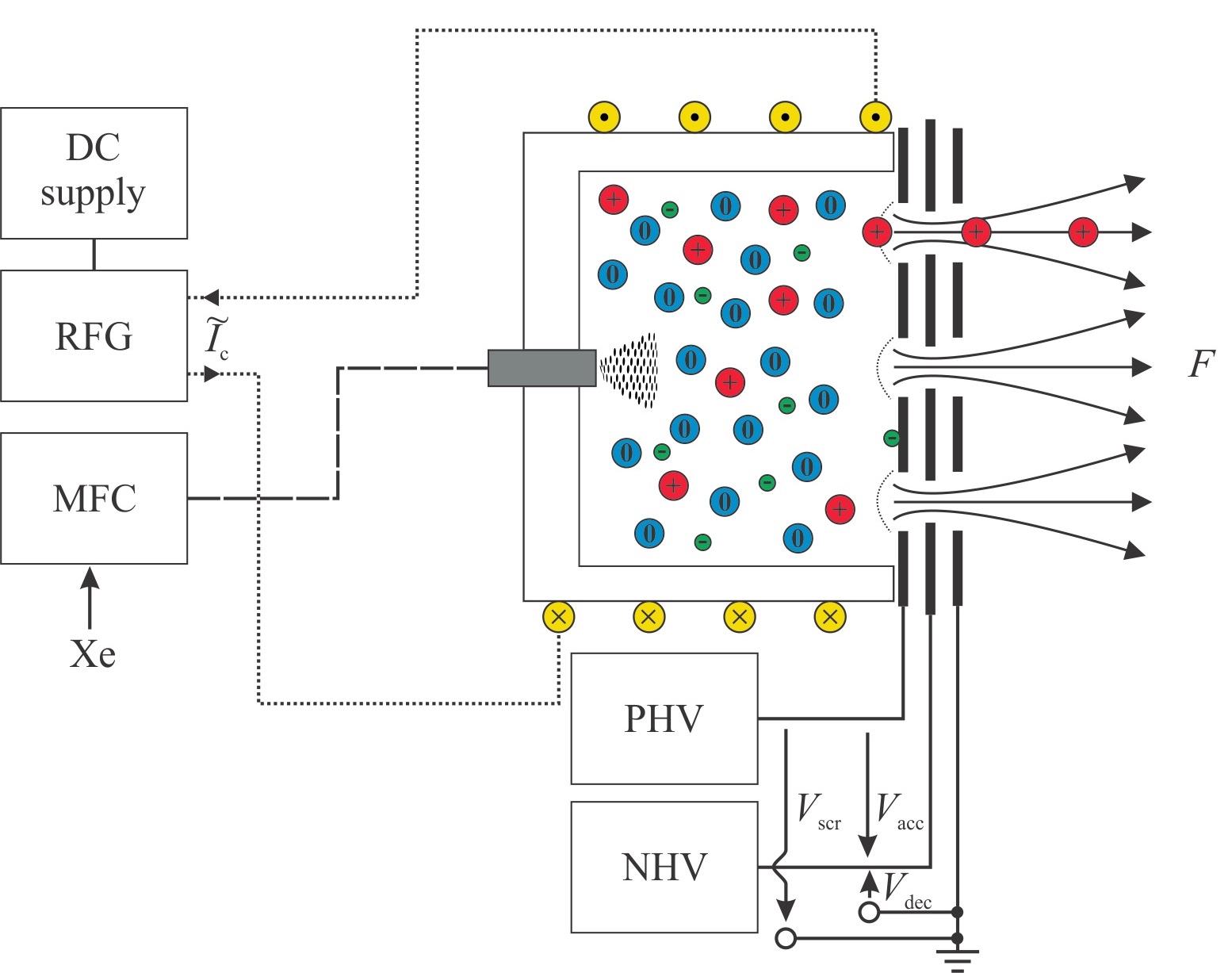