Some closed-form expressions are derived for the partial direct and indirect transition amplitudes for proton-impact single ionization of the hydrogen molecules using a first-order two-effective center continuum-wave approximation. The method satisfies the correct boundary conditions in the entrance channel. The basic assumption in this model is that when the active electron is ionized from one of the atomic centers in the molecule, the other scattering center is completely screened by the passive electron. Consequently, the transition amplitude can be expressed as a superposition of the partial ionization amplitudes from two independent scattering centers located at a constant distance from each other. The superposition of the partial amplitudes leads to different interference patterns for various orientations of the molecular target. The calculated cross sections are compared with the experiments and also with other theories. The comparison shows that the present results are reliable. 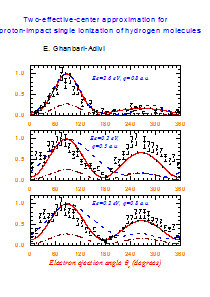