Two sets of performance data of the same radio-frequency ion-thruster (RIT) have been recorded using iodine and xenon, respectively, as propellant. To characterize the thruster’s performance, we have recorded the radio-frequency DC-power, required for yielding preset values of the extracted ion-beam currents, as a function of mass flow. For that purpose, an iodine mass flow system had to be developed, calibrated, and integrated into a newly-built test facility for studying corrosive propellants. The performance mappings for iodine and xenon differ significantly despite comparable operation conditions. At low mass flows, iodine exhibits the better performance. The situation changes at higher mass flows where the performance of iodine is significantly poorer than that of xenon. The reason is very likely related to the molecular nature of iodine. Our results show that iodine as propellant is compatible with RIT technology. Furthermore, it is a viable alternative as propellant for dedicated space missions. In particular, when taking into account additional benefits such as possible storage as a solid and its low price the use of iodine as propellant in ion thrusters is competitive. 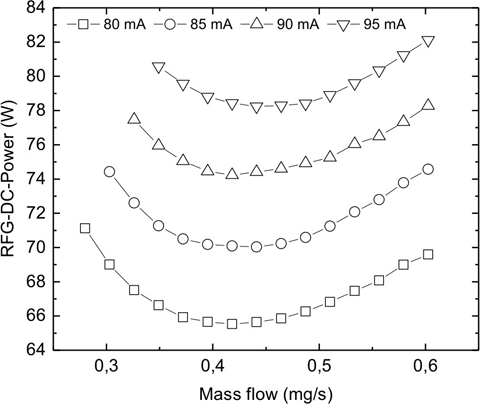