We present an experimental study on the stability of cluster cations formed by the assembly of tryptophan or serine moelcules inside charged helium droplets and subsequent droplet evaporation. The stability is probed via collision induced dissociation and mass spectrometry. We focus on the neutral loss of 18 Da that was previously proposed to result in the formation of an amide bond in amino acid clusters. We show that the cluster cations formed by the neutral loss of 18 Da from protonated parent cluster ion precursors are softly, presumably van der Waals, bound similar to the parent and protonated parent cluster cations. Cluster cations formed after neutral loss of 18 Da from the parent cluster cations are strongly bound, indicating the formation of new covalent bonds. Even though we observe a signal at m/z corresponding to dipeptide cations, their collision induced dissociation fragmentation does not allow unambiguous identification of their structure, particularly the amide bond. Our study at cryogenic conditions of He droplets demonstrates that peptide formation by the cluster ion polymerization is not a barrierless process and the formation of amide bonds may depend on activation methods and available catalysts.

© The Author(s) 2020. This article is published with open access at Springerlink, corrected publication December 2020 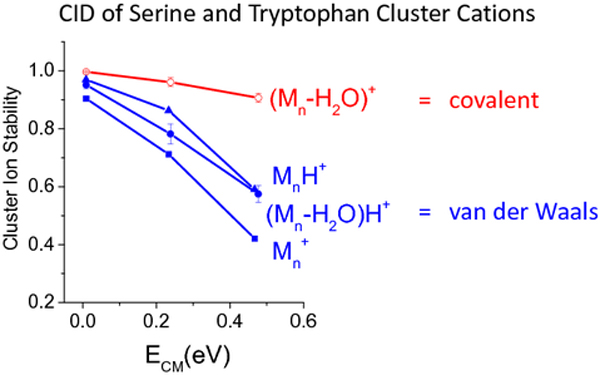