Electron-induced chemistry in imidazole (IMI) clusters embedded in helium nanodroplets (with an average size of 2 × 105 He atoms) has been investigated with high-resolution time-of-flight mass spectrometry. The formation of both, negative and positive, ions was monitored as a function of the cluster size n. In both ion spectra a clear series of peaks with IMI cluster sizes up to at least 25 are observed. While the anions are formed by collisions of IMIn with He*–, the cations are formed through ionization of IMIn by He+ as the measured onset for the cation formation is observed at 24.6 eV (ionization energy of He). The most abundant series of anions are dehydrogenated anions IMIn–1(IMI–H)–, while other anion series are IMI clusters involving CN and C2H4 moieties. The formation of cations is dominated by the protonated cluster ions IMInH+, while the intensity of parent cluster cations IMIn+ is also observed preferentially for the small cluster size n. The observation of series of cluster cations [IMInCH3]+ suggests either CH3+ cation to be solvated by n neutral IMI molecules, or the electron-induced chemistry has led to the formation of protonated methyl-imidazole solvated by (n – 1) neutral IMI molecules. 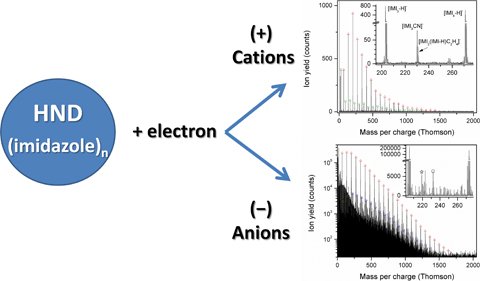