State-selective single electron capture, excitation and ionization processes in proton collisions with Be+(1s22s) and Be+(1s22p) ions are studied by using the quantum-mechanical molecular orbital (QMOCC) and the two-center atomic orbital close-coupling (TC-AOCC) methods in the combined energy range 0.01–300 keV/u. In the QMOCC calculations six 2Σ+ and three 2Π states are included in the expansion basis. The TC-AOCC expansion basis includes 35 discrete states centered on the proton and 182 states on Be2+ out of which 88 are continuum pseudostates. The atomic states on Be2+ are generated by a one-electron model potential for the electron interaction with Be2+ ion core that reproduces the exact energies with accuracy better than 0.5%. Total and state-selective electron capture and excitation cross sections to final states with n ≤ 4 are presented. The sum of the cross sections for the transitions to continuum pseudostates (ionization cross section) is also reported for both initial target states. The physical mechanisms involved in the dynamics of considered processes are discussed in detail at both low and high energies. The reported cross sections should be useful in the kinetic modeling and diagnostics of edge plasmas in present magnetic fusion experiments, as well as in the current ITER design, in which beryllium is used as first wall material. 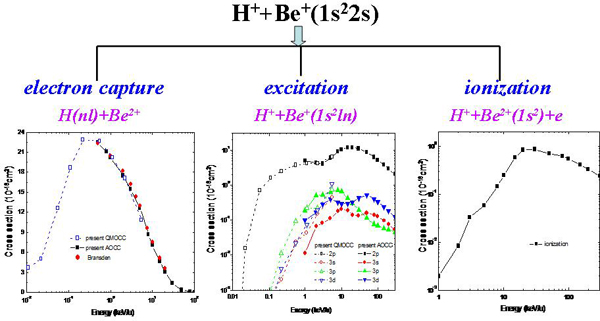