We study the collisional dynamics of multiple dark solitons in a Bose–Einstein condensate confined by a toroidal trap. We assume a tight enough confinement in the radial direction to prevent possible dissipative effects due to the presence of solitonic vortices. Analytical expressions for the initial order parameters with imprinted phases are utilized to generate different initial arrays of solitons, for which the time-dependent Gross–Pitaevskii equation is numerically solved. Given that the soliton velocity is conserved due to the lack of dissipation, we are able to apply a simple quasiparticle description of the soliton dynamics. In fact, the trajectory equations are written in terms of the velocities and the angular shifts produced at each collision, in analogy to the infinite one-dimensional system. To calculate the angular shifts, we directly extract them from the trajectories given by the Gross–Pitaevskii simulations and, on the other hand, we show that accurate values can be analytically obtained by adapting a formula valid for the infinite one-dimensional system that involves the healing length, which in our inhomogeneous system must be evaluated in terms of the sound velocity along the azimuthal direction. We further show that very good estimates of such a sound velocity can be directly determined by using the ground state density profile and the values of the imprinted phases. We discuss the possible implementation of the system here proposed using the current experimental techniques. 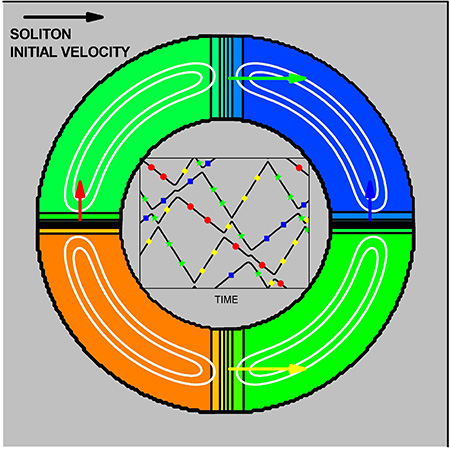