We have performed a comparative study of the electronic structure, stability, and magnetic properties of a series of metal–chalcogen clusters stabilized by PH3 ligands. Clusters studied include TM6X8(PH3)6, TM = Cr, Mo, Re, Co, X = Se, Te, and Ni6X(PH3)6, X = Se, and Te. We find that the phosphine ligands act as charge donors, transferring charge to the metal sites, creating an electrostatic effect that lowers the ionization energy. The electronic structure of the cluster also has a significant effect on its charge donor properties, as the Re cluster has a closed electronic shell with a charge state of +2, making it an alkaline earth superatom. The chromium clusters are found to have a series of close lying magnetic isomers. Selenium is a better charge acceptor than tellurium and this causes the telluride clusters to have lower ionization potentials, while the enhanced charge transfer to selenium increases the binding energy of the phosphine ligand. 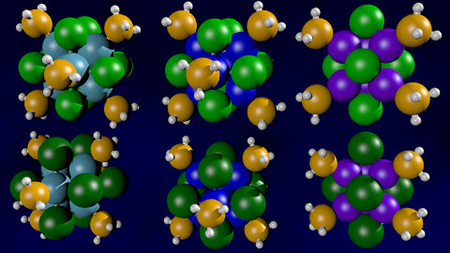