Subharmonic resonance behaviors are investigated for the classical hydrogen atom, with classical radiation damping and circularly polarized light acting on the classical electron. This study is intended for both potential experimental applications as well as for deeper theoretical purposes. Long resonant states are predicted for realistic Rydberg atoms and highly excited hydrogen states. Several previously undiscovered physical effects are predicted. First, the semimajor axis remains relatively constant when in subharmonic resonance; second, the eccentricity steadily increases until a maximum, critical value is reached, at which point orbital decay sets in. If the initial orbit is circular, this critical eccentricity value is shown to always be the same for each subharmonic condition, regardless of the initial orbital radius. An analytic derivation for this result is presented. The illustrated dynamics are of interest for the classical theory of stochastic electrodynamics (SED) regarding whether SED can fundamentally describe more of quantum phenomena, particularly atomic excited state behavior and related emission and absorption spectra. Also of interest are how classical resonances can be imposed on a near continuum of quantum states. Finally, there may be future technological applications, such as “reading” and “writing” information into Rydberg atoms in the form of subharmonic resonances. 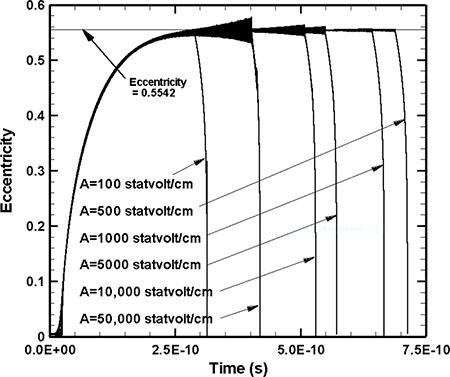