Transport of secondary electrons through coatings of ion-irradiated metallic nanoparticles★

The transport of low-energy electrons through the coating of a radiosensitizing metallic nanoparticle under fast ion irradiation is analyzed theoretically and numerically. As a case study, we consider a poly(ethylene glycol)-coated gold nanoparticle of diameter 1.6 nm excited by a carbon ion in the Bragg peak region in water as well as by more energetic carbon ions. The diffusion equation for low-energy electrons emitted from a finite-size spherical source representing the surface of the metal core is solved to obtain the electron number density as a function of radial distance and time. Information on the atomistic structure and composition of the coating is obtained from molecular dynamics simulations performed with the MBN Explorer software package. Two mechanisms of low-energy electron production by the metallic core are considered: the relaxation of plasmon excitations and collective excitations of valence d electrons in individual atoms of gold. Diffusion coefficients and characteristic lifetimes of electrons propagating in gold, water, and poly(ethylene glycol) are obtained from relativistic partial wave analysis and the dielectric formalism, respectively. On this basis, the number of electrons released through the organic coating into the surrounding aqueous medium and the number of hydroxyl radicals produced are evaluated. The largest increase of the radical yield due to low-energy electrons is observed when the nanoparticle is excited by an ion with energy significantly exceeding that in the Bragg peak region. It is also shown that the water content of the coating, especially near the surface of the metal core, is crucial for the production of hydroxyl radicals. 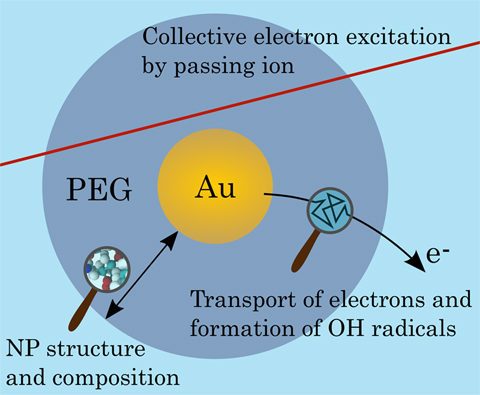