Impact of volume and surface processes on the pre-ionization of dielectric barrier discharges: advanced diagnostics and fluid modeling★

The phenomenology and breakdown mechanism of dielectric barrier discharges are strongly determined by volume and surface memory effects. In particular, the pre-ionization provided by residual species in the volume or surface charges on the dielectrics influences the breakdown behavior of filamentary and diffuse discharges. This was investigated by advanced diagnostics such as streak camera imaging, laser photodetachment of negative ions and laser photodesorption of electrons from dielectric surfaces in correlation with 1D fluid modeling. The streak camera images show that an increasing number of residual charges in the volume changes the microdischarge breakdown in air-like gas mixtures from a cathode-directed streamer to a simultaneous propagation of cathode- and anode-directed streamers. In contrast, seed electrons are important for the pre-ionization if the density of residual charges in the volume is low. One source of seed electrons are negative ions, whose density exceeds the electron density during the pre-phase of diffuse helium–oxygen barrier discharges as indicated by the laser photodetachment experiments. Electrons desorbed from the cathodic dielectric have an even larger influence. They induce a transition from the glow-like to the Townsend-like discharge mode in nominally pure helium. Apart from analyzing the importance of the pre-ionization for the breakdown mechanism, the opportunities for manipulating the lateral structure and discharge modes are discussed. For this purpose, the intensity and diameter of a diffuse discharge in helium are controlled by an illuminated semiconducting barrier. 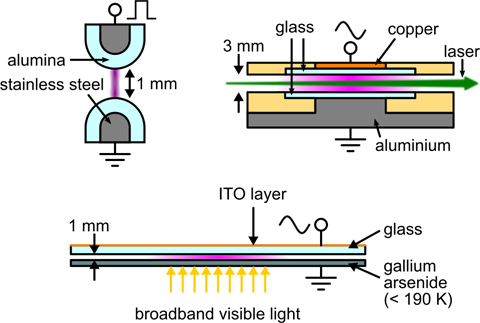