On the strong influence of molecular interactions over large distances

Molecular-dynamics simulations of liquid water show deterministic chaos, i.e. an intentionally introduced molecular position shift of an individual molecule increases exponentially by a factor of 10 in 0.23 ps. This is a Lyaponov instability. As soon as it reaches molecular scale, the direction of the resulting shift in molecular motions is unpredictable. The influence of any individual distant particle on an observed molecule will be minute, but the effect will quickly increase to molecular scale and beyond due to this exponential growth. Consequently, any individual particle in the universe will affect the behavior of any molecule within at most 33 ps after the interaction reaches it. A larger distance of the faraway particle does not decrease the influence on an observed molecule, but the effect reaches molecular scale only some ps later. Thus in evaluating the interactions, nearby and faraway molecules have to be equally accounted for. The consequences of this quickly reacting network of interactions on universal scale are fundamental. Even in a strictly deterministic view, molecular behavior is principally unpredictable, and thus has to be regarded random. Corresponding statements apply for any particles interacting. This result leads to a fundamental rethinking of the structure of interactions of molecules and particles as well as the behavior of reality. 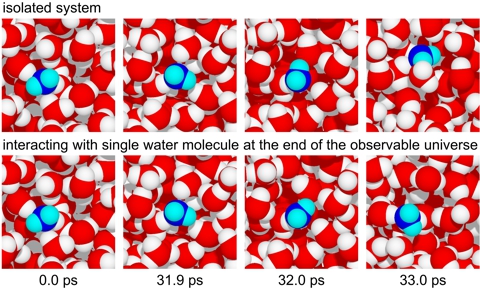