More than 1043 positrons annihilate every second in the centre of our Galaxy yet, despite four decades of observations, their origin is still unknown. Many candidates have been proposed, such as supernovae and low mass X-ray binaries. However, these models are difficult to reconcile with the distribution of positrons, which are highly concentrated in the Galactic bulge, and therefore require specific propagation of the positrons through the interstellar medium. Alternative sources include dark matter decay, or the supermassive black hole, both of which would have a naturally high bulge-to-disc ratio. The chief difficulty in reconciling models with the observations is the intrinsically poor angular resolution of gamma-ray observations, which cannot resolve point sources. Essentially all of the positrons annihilate via the formation of positronium. This gives rise to the possibility of observing recombination lines of positronium emitted before the atom annihilates. These emission lines would be in the UV and the NIR, giving an increase in angular resolution of a factor of 104 compared to gamma ray observations, and allowing the discrimination between point sources and truly diffuse emission. Analogously to the formation of positronium, it is possible to form atoms of true muonium and true tauonium. Since muons and tauons are intrinsically unstable, the formation of such leptonium atoms will be localised to their places of origin. Thus observations of true muonium or true tauonium can provide another way to distinguish between truly diffuse sources such as dark matter decay, and an unresolved distribution of point sources. 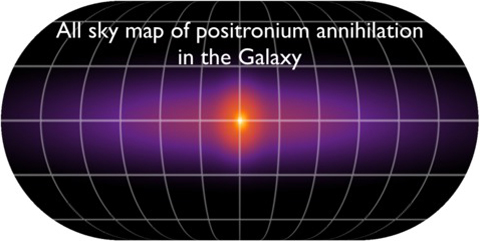