In this work we propose a complete and consistent set of cross sections for electron scattering in mercury vapor. The set is validated through a series of comparisons between swarm data calculated using a multi term theory for solving the Boltzmann equation and Monte Carlo simulations, and the available experimental data. Other sets of cross sections for electron scattering in mercury vapor were also used as input in our numerical codes with the aim of testing their completeness, consistency and accuracy. The calculated swarm parameters are compared with measurements in order to assess the quality of the cross sections in providing data for plasma modeling. In particular, we discuss the dependence of transport coefficients on the pressure and temperature of mercury vapor, and the occurrence of negative differential conductivity (NDC) in the limit of lower values of E∕N. We have shown that the phenomenon of NDC is induced by the presence of mercury dimers and that can be controlled by varying either pressure or temperature of mercury vapor. The effective inelastic cross section for mercury dimers is estimated for a range of pressures and temperatures. It is shown that the measured and calculated drift velocities agree very well only if the effective inelastic cross section for mercury dimers and thermal motion of mercury atoms are carefully considered and implemented in numerical calculations. 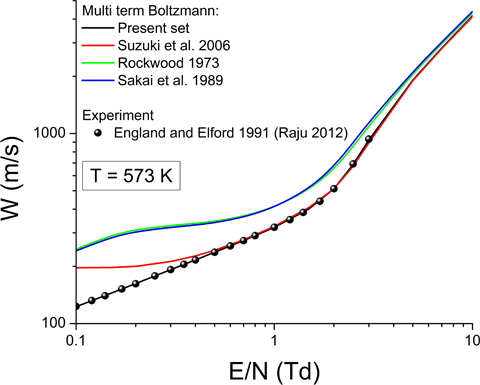