Thermal behavior of Pt10 and Pt1 bound to a silicon substrate prepared by the impact of size-selected Pt cluster ions at 1 eV per Pt atom was investigated. Their height and diameter were obtained by statistical analysis of their images using scanning-tunneling microscopy. The Pt10 are stably bound to the Si surface as monatomic-layered Pt10Six disks with insertion of Si atoms into the clusters at the moment of the impact, and they start to be decomposed between 623 and 673 K under vacuum conditions. The thermal stability of the Pt10Six disks is comparable to that of a Pt thin film prepared on a Si substrate, but inferior to that of Pt30 disks on the Si substrate. Comparing with thermal behavior of Pt atoms and a PtSi thin film on the Si substrate, it has been concluded that more Si atoms start to diffuse into a Pt10Six disk between 623 and 673 K, while they do not into a Pt30 disk having a close-packed arrangement of the Pt atoms as high as 673 K, owing to a higher barrier for the Si insertion into the close-packed cluster disk than into the Pt10Six disk having a longer Pt-Pt internuclear distance. 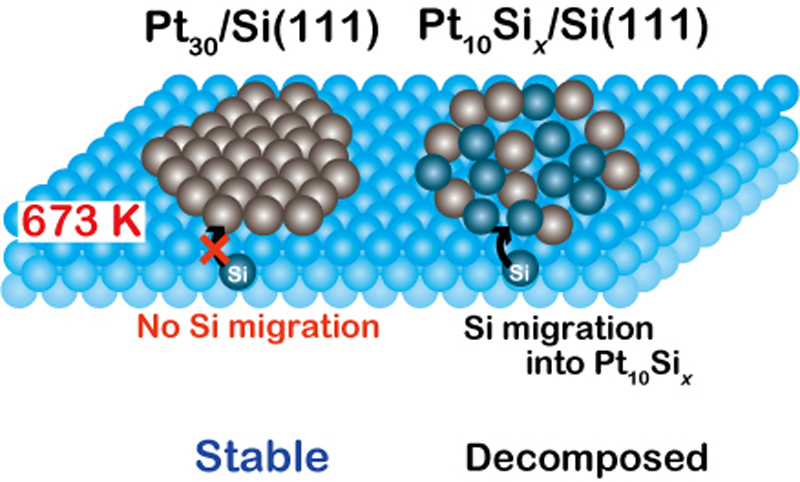