General characteristics of sub-tropical middle atmospheric temperature structure over a high altitude station, Mt. Abu (24.5°N, 72.7°E, altitude ~1670 m, above mean sea level (amsl)) are presented using about 150 nights observational datasets of Rayleigh Lidar. The monthly mean temperature contour plot shows two distinct maxima in the stratopause region (~45–55 km), occurring during February-March and September-October, a seasonal dependence similar to that reported for mid- and high-latitudes respectively. Semi-Annual Oscillation (SAO) are stronger at an altitude ~60 km in the mesospheric temperature in comparison to stratospheric region. A comparison with the satellite (Halogen Occultation Experiment, (HALOE)) data shows qualitative agreement, but quantitatively a significant difference is found between the observation and satellite. The derived temperatures from Lidar observations are warmer ~2–3 K in the stratospheric region and ~5–10 K in the mesospheric region than temperatures observed from the satellite. A comparison with the models, COSPAR International Reference Atmosphere (CIRA)-86 and Mass Spectrometer Incoherent Scatter Extended (MSISE)-90, showed differences of ~3 K in the stratosphere and ~5–10 K in the mesosphere, with deviations somewhat larger for CIRA-86. In most of the months and in all altitude regions model temperatures were lower than the Lidar observed temperature except in the altitude range of 40–50 km. MSISE-90 Model temperature overestimates as compared to Lidar temperature during December-February in the altitude region of 50–60 km. In the altitude region of 55–70 km both models deviate significantly, with differences exceeding 10–12 K, particularly during equinoctial periods. An average heating rate of ~2.5 K/month during equinoxes and cooling rate of ~4 K/month during November-December are found in altitude region of 50–70 km, relatively less heating and cooling rates are found in the altitude range of 30–50 km. The stratospheric temperature derived from the Lidar and columnar ozone observed by the Total Ozone Mapping Spectrometer (TOMS) over Mt. Abu shows good correlation (r2 = 0.61) and indicates the association of ozone with the temperature. 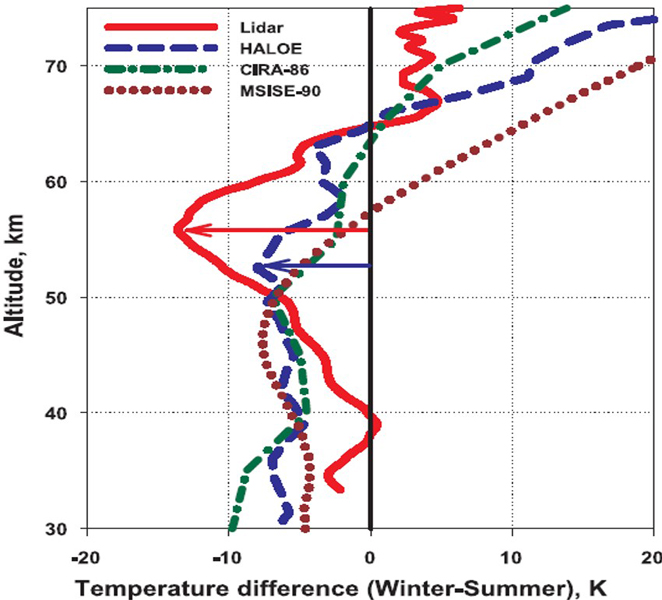