The LLE, pattern formation and a novel coherent source*

The LLE was introduced in order to provide a paradigmatic model for spontaneous spatial pattern formation in the field of nonlinear optics. In the first part of this paper we describe in details its historical evolution. We underline, first of all, that the multimode instability of optical bistability represents an important precursor of the LLE. Next, we illustrate how the original LLE was conceived in order to describe pattern formation in the planes transverse with respect to the longitudinal direction of propagation of light in the nonlinear medium contained in the optical cavity. We emphasize, in particular, the crucial role of the low transmission limit (also called mean field limit or uniform field limit in the literature) in determining the simplicity of the equation. In discussing transverse pattern formation in the LLE, we underline incidentally the presence of very important quantum aspects related to squeezing of quantum fluctuations and to quantum imaging. We consider not only the case of global patterns but also localized structures (cavity solitons and their control). Then we turn to the temporal/longitudinal version of the LLE, formulated by Haelterman et al. [H. Haelterman, S. Trillo, S. Wabnitz, Opt. Commun. 91, 401 (1992)], and to its equivalence with the transverse LLE in 1D, discussing especially the phenomenon of temporal cavity solitons, their experimental observation and their control. Finally for the first part we turn to the very recent topic of broadband frequency combs, observed in a versatile multiwavelength coherent source (driven Kerr microcavity), which is raising a lot of interest and of research activities because of its very favourable physical characteristics, which support quite promising applicative perspectives. Kerr microcavities realize in an ideal manner the basic assumptions of the LLE, and the spontaneous formation of travelling patterns along the microcavity is the crucial mechanism which creates the combs and governs their features. Thus the LLE represents a case of spontaneous pattern formation which is immediately linked to a promising applicative avenue. The second part of the paper is devoted to the detailed derivation from the Maxwell-Bloch equations of the temporal/longitudinal LLE which was proposed by ourselves many years ago without providing a complete derivation. Such an equation is equivalent to the standard temporal/longitudinal version of the LLE in the case of anomalous dispersion. Our derivation elucidates in the best way the connection between the temporal/longitudinal version of the LLE and the multimode instability of optical bistability. 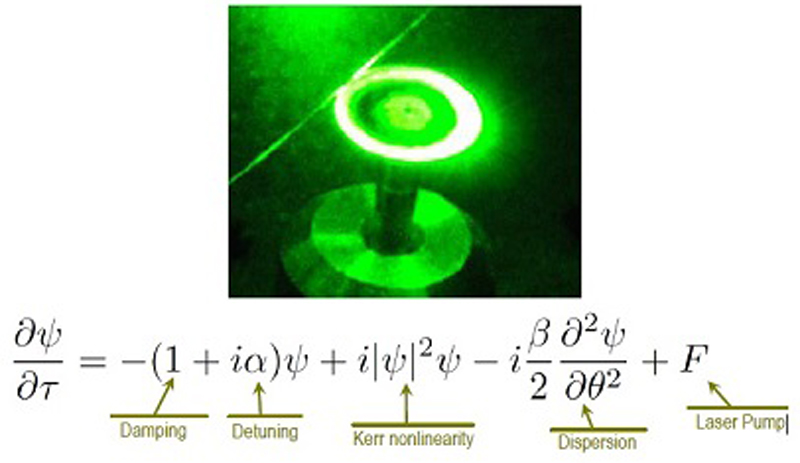