The hollow electrode Z-pinch (HEZP) experiment is a new construction for the electromagnetic propulsion application in which the plasma is formed by the discharge between a plate and ring electrodes through which the plasma is propelled. The experimental results for 8 kV charging voltage shows that the peak discharge current is about 109 kA, which is in good agreement with the value obtained from the simulation in the slug model that simulates the sheath dynamics in the HEZP. The fitting of the discharge current from the slug model indicates that the total system inductance is 238 nH which is relatively a high static inductance accompanied with a deeper pinch depth indicating that the fitted anomalous resistance would be about 95 mΩ. The current and mass factors vary with the changing the gas pressure and the charging voltage. The current factor is between 0.4 and 0.5 on average which is relatively low value. The mass factor decreases by increasing the gas pressure indicating that the sheath is heavy to be driven by the magnetic pressure, which is also indicated from the decreases of the drive factor, hence the radial sheath velocity decreases. The plasma inductance and temperature increase with the increase of the drive factor while the minimum pinch radius decreases. 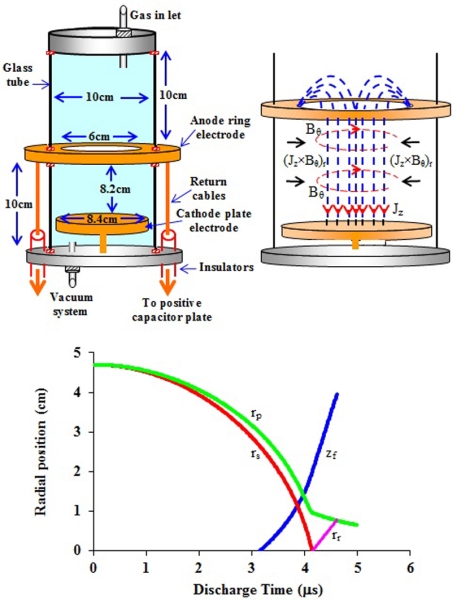