To explain the experimentally observed metastability of the trication B23+, we study this system by various ab-initio methods. Whereas the electronic ground state X2Σu+ of B23+ turns out to be unstable, the potential energy curves of the lowest excited state 12Πu and of the quartet state 14Σg− form barriers that support quasi-bound vibronic states. The lifetimes of these states are not only determined by the respective (dissociative) tunnelling rates, but also by possible radiative electronic transitions and predissociation via spin-orbit coupling, where the latter furnish the decisive decay mechanism for the low-lying vibronic levels. In case of the quadruply charged system B24+, our computations do not predict any metastable states in the low-lying electronic spectrum. The deviation from a purely Coulombic repulsive behaviour in B24+ is quantified by fitting the potential energy curves to a modified Murrell-Sorbie function. 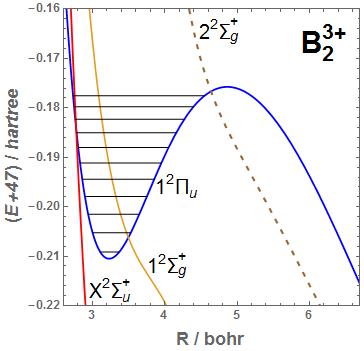