Microfilaments of dielectric barrier discharge are known for their multiple re-appearance at the same spot on dielectrics. This effect of localized re-appearance is driven by residual excited species and ions, surface charge deposited on the dielectric and the local temperature build-up resulting in the local increase of reduced electric field E/ΔN. To assess the magnitude of the latter, the breakdown voltage vs. temperature up to 180 °C was carefully measured at coplanar DBD and used as an input into the numerical simulation of heat build-up by the train of discharge pulses. An average reduction of breakdown voltage was found to be 20 V/K. The model predicted a quasi-stable microfilament temperature into which the thermal build-up rapidly converges. Its magnitude agreed well with the reported rotational temperature of similar electrode configuration. The impact of quasi-stable temperature on microfilament formation dynamics is further discussed. 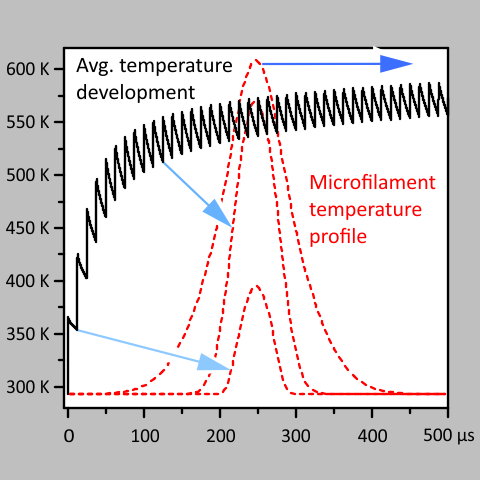