Enantiospecific adsorption of cysteine on a chiral Au34 cluster*

The interaction of biological molecules like chiral amino acids with chiral metal clusters is becoming an interesting and active field of research because of its potential impact in, for example, chiral molecular recognition phenomena. In particular, the enantiospecific adsorption (EA) of cysteine (Cys) on a chiral Au55 cluster was theoretically predicted a few years ago. In this work, we present theoretical results, based on density functional theory, of the EA of non-zwitterionic cysteine interacting with the C3-Au34 chiral cluster, which has been experimentally detected in gas phase, using trapped ion electron diffraction. Our results show that, indeed, the adsorption energy of the amino acid depends on which enantiomers participate in the formation Cys-Au34 chiral complex. EA was obtained in the adsorption modes where both the thiol, and the thiol-amino functional groups of Cys are adsorbed on low-coordinated sites of the metal cluster surface. Similarly to what was obtained for the Cys-Au55 chiral complex, in the present work, it is found that the EA is originated from the different strength and location of the bond between the COOH functional group and surface Au atoms of the Au34 chiral cluster. Calculations of the vibrational spectrum for the different Cys-Au34 diastereomeric complexes predict the existence of a vibro-enantiospecific effect, indicating that the vibrational frequencies of the adsorbed amino acid depend on its handedness. 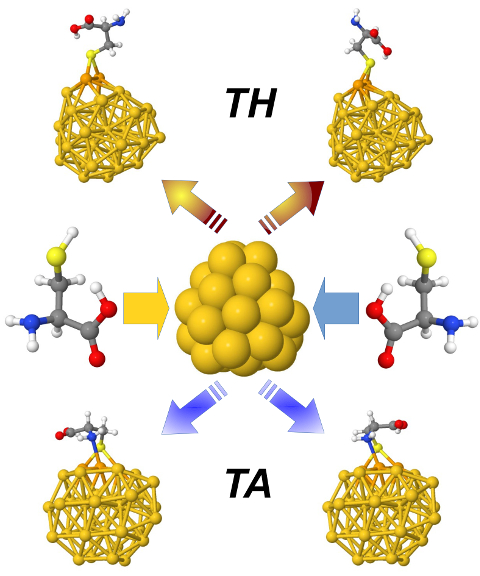