Secondary ionisations in a wall-less ion-counting nanodosimeter: quantitative analysis and the effect on the comparison of measured and simulated track structure parameters in nanometric volumes*

The object of investigation in nanodosimetry is the physical characteristics of the microscopic structure of ionising particle tracks, i.e. the sequence of the interaction types and interaction sites of a primary particle and all its secondaries, which reflects the stochastic nature of the radiation interaction. In view of the upcoming radiation therapy with protons and carbon ions, the ionisation structure of the ion track is of particular interest. Owing to limitations in current detector technology, the only way to determine the ionisation cluster size distribution in a DNA segment is to simulate the particle track structure in condensed matter. This is done using dedicated computer programs based on Monte Carlo procedures simulating the interaction of the primary ions with the target. Hence, there is a need to benchmark these computer codes using suitable experimental data. Ionisation cluster size distributions produced in the nanodosimeter’s sensitive volume by monoenergetic protons and alpha particles (with energies between 0.1 MeV and 20 MeV) were measured at the PTB ion accelerator facilities. C3H8 and N2 were alternately used as the working gas. The measured data were compared with the simulation results obtained with the PTB Monte-Carlo code PTra [B. Grosswendt, Radiat. Environ. Biophys. 41, 103 (2002); M.U. Bug, E. Gargioni, H. Nettelbeck, W.Y. Baek, G. Hilgers, A.B. Rosenfeld, H. Rabus, Phys. Rev. E 88, 043308 (2013)]. Measured and simulated characteristics of the particle track structure are generally in good agreement for protons over the entire energy range investigated. For alpha particles with energies higher than the Bragg peak energy, a good agreement can also be seen, whereas for energies lower than the Bragg peak energy differences of as much as 25% occur. Significant deviations are only observed for large ionisation cluster sizes. These deviations can be explained by a background consisting of secondary ions. These ions are produced in the region downstream of the extraction aperture by electrons with a kinetic energy of about 2.5 keV, which are themselves released by ions of the “primary” ionisation cluster hitting an electrode in the ion transport system. Including this background of secondary ions in the simulated cluster size distributions leads to a significantly better agreement between measured and simulated data, especially for large ionisation clusters. 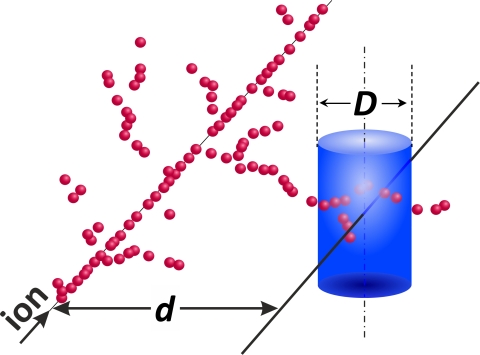