In this article we report the usage of (1) ΦX174 dsDNA as a model for electron – DNA interaction studies, (2) semiconductor grade 100 silicon wafer, gold on chrome on glass, and tantalum foil substrates, drying process and effect of temperature, on the DNA film formation and its stability, (3) stability of DNA films formed from DNA suspended in nano pure water and with additives like NaOH and TE buffer, and (4) effect of 0.001 mM NaOH and TE buffer (at pH 7.5) additives on DNA damage induced by 25 to 100 eV electrons. The results show that when tantalum foils are used as a substrate, it results in films, which have DNA distributed fairly uniformly and is also stable against strand breaks affected due to the stress of the drying. Electron irradiation of DNA suspended in TE buffer result in the formation of only relaxed form. When the DNA is suspended in 0.001 mM NaOH and irradiated similarly, linear form and cross links are also formed, in addition to relaxed form. This could be likely due to the secondary electrons interacting with Na+ ions that are bound to the DNA causing a second strand break in the opposite strand. 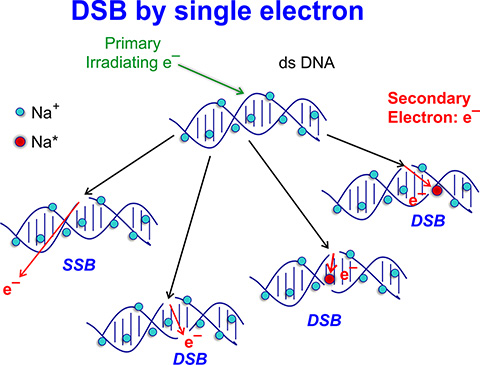