In this paper, the entanglement and quantum discord created due to a one-dimensional scattering process occurring in a system including two observers, Alice and Bob, is theoretically investigated. In this process, Alice sends a qubit to Bob who is located next to a fixed localized impurity. The impurity is considered as a qubit too. After a Kondo interaction occurred between the components, the incident particle is reflected to Alice by a definite probability. The scattering process generates a correlation between the reflected and the fixed localized particles. We consider different setups for such a scattering process and calculate both the entanglement and the quantum discord created between the ingredients. Both the plane-wave and Gaussian-wave treatments of the incident particle are examined. The dependence of the created entanglement on the initial width of the incident Gaussian wave packet is explored. It is shown that setting the impurity between the incident particle and an infinite potential wall is an effective way to produce a considerable entanglement in the final state. 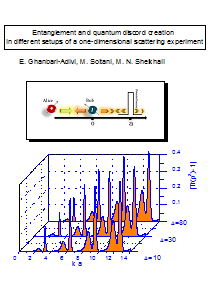