Simulation of the secondary electrons energy deposition produced by proton beams in PMMA: influence of the target electronic excitation description*

We have studied the radial dependence of the energy deposition of the secondary electron generated by swift proton beams incident with energies T = 50 keV–5 MeV on poly(methylmethacrylate) (PMMA). Two different approaches have been used to model the electronic excitation spectrum of PMMA through its energy loss function (ELF), namely the extended-Drude ELF and the Mermin ELF. The singly differential cross section and the total cross section for ionization, as well as the average energy of the generated secondary electrons, show sizeable differences at T ⩽ 0.1 MeV when evaluated with these two ELF models. In order to know the radial distribution around the proton track of the energy deposited by the cascade of secondary electrons, a simulation has been performed that follows the motion of the electrons through the target taking into account both the inelastic interactions (via electronic ionizations and excitations as well as electron-phonon and electron trapping by polaron creation) and the elastic interactions. The radial distribution of the energy deposited by the secondary electrons around the proton track shows notable differences between the simulations performed with the extended-Drude ELF or the Mermin ELF, being the former more spread out (and, therefore, less peaked) than the latter. The highest intensity and sharpness of the deposited energy distributions takes place for proton beams incident with T ~ 0.1–1 MeV. We have also studied the influence in the radial distribution of deposited energy of using a full energy distribution of secondary electrons generated by proton impact or using a single value (namely, the average value of the distribution); our results show that differences between both simulations become important for proton energies larger than ~0.1 MeV. The results presented in this work have potential applications in materials science, as well as hadron therapy (due to the use of PMMA as a tissue phantom) in order to properly consider the generation of electrons by proton beams and their subsequent transport and energy deposition through the target in nanometric scales. 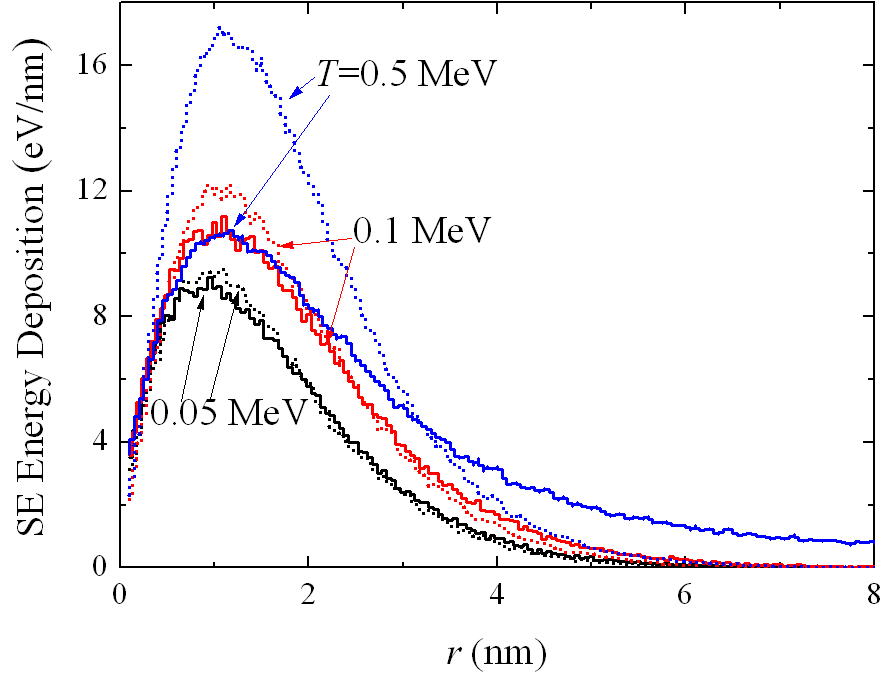