Confinement effects on an ultra-cold matter wave-packet by a square well impurity near the de-localization threshold: analytic solutions, scaling, and width properties

The determination of the maximum number of atoms and the density profile of an ultra-cold wave-packet, under confinement conditions by an attractive impurity near the de-localization threshold, have been an open problem in ultra-cold atom physics. In this work, we study the effect of a wave-guide impurity on an ultra-cold matter wave-packet at the threshold of de-localization. The impurity is modeled by a 1-D square well potential with depth V0 and length 2R0. Coupling of the square well potential to a contact impurity of strength β at the center is also considered. The time-independent non-linear Schrödinger equation describing a Bose-Einstein condensate at the delocalization threshold is exactly solved. The density profile, maximum non-linear coupling constant, gmax, and maximum number of atoms, Nmax, prompt to be localized by the defect potential in the ground and first excited states are also reported. It is shown that gmax and the density profiles become only functions of the reduced impurity size ξ = √V0R0 . It is also found that the first excited state at the threshold of de-localization exists only for ξ≥π/(2√2) , always holding a lower number of atoms than the corresponding ground state for the same reduced impurity size. Also, the addition of a repulsive contact impurity leads to a non-linear coupling constant at the de-localization threshold lower than that of the square well potential. In spite of the non-linear character of the Gross-Pitaevskii equation, it is found that a general scaling-law holds for defects with the same ξ, related with the same gmax, having the same reduced density profile in the quasi-free direction. We report the full width at half maximum for the wave-function and density profile, finding a large spread for small reduced confining conditions. Implications of these results for the determination of the wave-packet properties under confinement in atom chip and Bose-Einstein condensates are presented with the aim to motivate further experimental work. 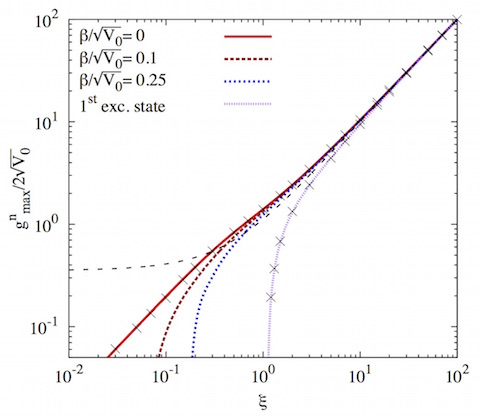