Ejected electron spectroscopy has been used to study singly and doubly excited states of neon at constant incident electron energies between 505 and 2018 eV and ejection angles from 10° to 130° with high resolution in ejected energy range from 12 to 46 eV. The full ejected electron energy range has been studied at two extreme incidence energies and three ejected angles, namely 40°, 90° and 130°. The low energy region (12 to 21.5 eV) has been investigated at 505 eV over the full angular range and at 90° at six incident energies from 505 to 2018 eV. The features in the ejected electron spectra have been attributed to the autoionisation of Ne+ (2s2p6nl) excited states and Ne (2s2p5nln′l′ and 2s22p4nln′l′) double excited autionising states. Lower energy ejected electrons arise from simultaneous excitation of s and p electrons above the second ionisation potential (62.53 eV) while higher energy ejected electrons are coming from singly and doubly excited states. The high resolution and high sensitivity allowed us to see separated singlet from triplet states at high incident energies. Comparison with previous works gives a good agreement in energy positions of measured features. At the highest ejected electron energies only the features coming from double excitation are present, but with very low intensities in the spectra due to the small cross sections and high background. New resonances are found whose classification needs new experimental and theoretical investigations. 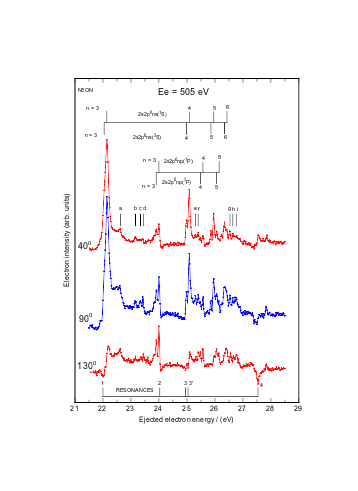