In this work, we report a detail theoretical study to understand the quantum coherence processes induced by three laser fields in a multilevel atom. In one of the coupling scheme using three laser fields we have theoretically simulated the EIA and EIT resonances simultaneously in a single probe transmission profile. It has been shown that these two coherent resonances of opposite kinds can be tuned at any position of the probe profile and they cancel out when they are completely merged together. We have also theoretically calculated the dual-EIT as well as a single EIT resonance with improved contrast in an N-type scheme. It has been shown that the contrast of the V-type EIT is greatly enhanced in the N-type system when it is tuned to the position of Λ-type EIT. We have examined the atomic density effect on the enhanced N-type EIT resonance and it has been shown that the nature of variation of the line shape of this pronounced EIT resonance strongly depends on the variations of the individual Λ- and V-type EIT with atomic density. Theoretically simulated spectra have been compared with the experimental observations in rubidium vapour with its natural abundances. For the experimental comparison of the observed resonances under different atom-laser coupling schemes, we have used the D2 transition (5S1/2–5P3/2) of 85Rb isotope. A good agreement is found between the simulated results and the experimental spectra. 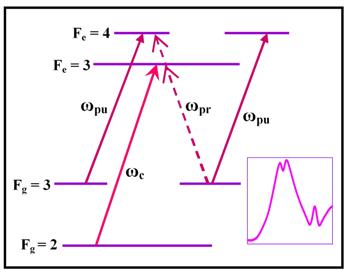