In this paper, the azimuthal backward waves (ABWs) in a magnetized plasma waveguide are studied. The waveguide is made of the loss-free metallic cylindrical wall and a dielectric annular layer and a magnetized plasma column in it. There are two annular rotating electron beams as the energy sources in the waveguide. The inner annular rotating electron beam (IAREB) is in the plasma region and the outer annular rotating electron beam (OAREB) is on the dielectric layer. The generation of ABWs as a possible consequence of the presence of two annular electron beams is proved by using Poynting’s theorem in the mentioned configuration. Also, it is observed that the width of allowed and forbidden frequencies of ABWs in the considered waveguide can be enhanced and shifted to the higher frequency side by changing the fundamental physical parameters. In addition, the effective factors on the frequency spectrum and growth rate of ABWs such as the geometric dimensions, the dielectric constant of the dielectric layer and electron plasma frequency of the annular electron beams are studied. 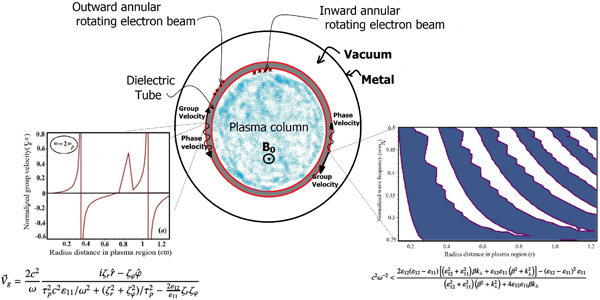