We have measured mass spectra for positive ions produced from neutral 5-fluorouracil by electron impact at energies from 0 to 100 eV. Fragment ion appearance energies of this (radio-)chemotherapy agent have been determined for the first time and we have identified several new fragment ions of low abundance. The main fragmentations are similar to uracil, involving HNCO loss and subsequent HCN loss, CO loss, or FCCO loss. The features adjacent to these prominent peaks in the mass spectra are attributed to tautomerization preceding the fragmentation and/or the loss of one or two additional hydrogen atoms. A few fragmentions are distinct for 5-fluorouracil compared to uracil, most notably the production of the reactive moiety CF+. Finally, multiphoton ionization mass spectra are compared for 5-fluorouracil from a laser thermal desorption source and from a supersonic expansion source. The detection of a new fragment ion at 114 u in the supersonic expansion experiments provides the first evidence for a clustering effect on the radiation response of 5-fluorouracil. By analogy with previous experiments and calculations on protonated uracil, this is assigned to NH3 loss from protonated 5-fluorouracil.

Contribution to the Topical Issue “Dynamics of Systems on the Nanoscale (2018)”, edited by Ilko Bald, Ilia A. Solov’yov, Nigel J. Mason and Andrey V. Solov’yov 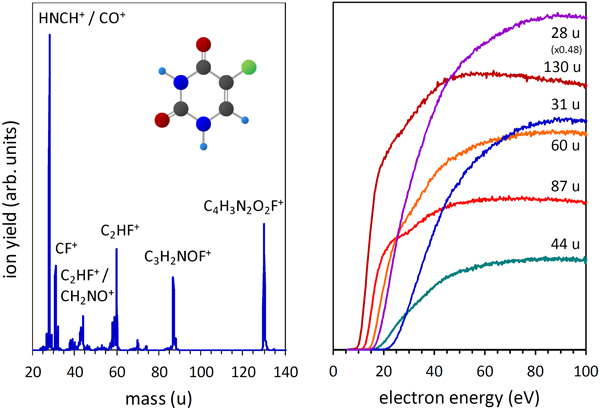